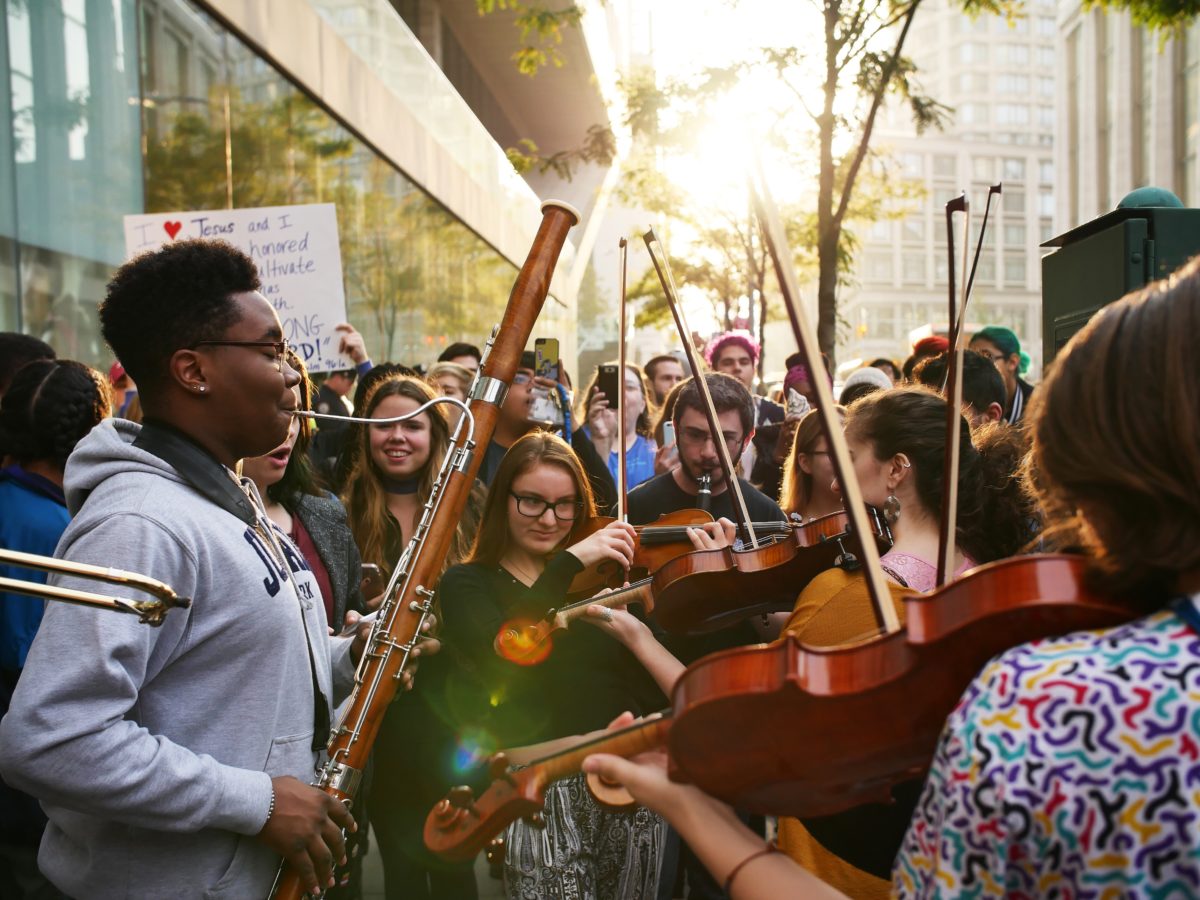 Young people from outside the Juilliard community stop to enjoy the spectacle (Photo: Daniel Davila)

Will Healy and collaborators rick-roll the hate group

Will Healy and collaborators rick-roll the hate group

WBC Counter-protest at Juilliard along with the Pride Flag (Photo: Daniel Davila)

Leaning up against her own picture outside the school, Jayme Lawson, a second year Drama student, tilts a curious head towards the sight of the day.

“I heard about this protest yesterday, and thought it was absolutely ridiculous that some people felt the need to spread hatred to our school. Luckily, a couple of students decided to have a protest of love, and I’m all about that. I don’t understand why anybody would seek to hate the arts. It seems like another reason to incite hatred in their own lives. And I don’t understand why anybody would choose to hate, ever.”

We all know that the Westboro Baptist Church came to picket in front of Juilliard this past Thursday. Three Caucasian women claimed a few squares of sidewalk in sweatshirts and wooly hats, American flags beneath their feet and the church’s infamous signs in hand. Besides the homophobic and Anti-Semitic proclamations, others held flashy phrases such as “The World Is Doomed” and “Mourn For Your Sins.” These women didn’t raise their voices, hand out pamphlets or attack pedestrians. They stood, garbed in slogans, and waited. One woman had headphones in and bounced to her WBC music while people passed by. Half a block away, Ruaridh Patterson, recent alum, bore the scene with instrument in hand and a rainbow flag caped around his back.

“I want to give a voice to the other side of the argument. The Westboro Baptist Church is picketing the Juilliard School and they equate what we do with vanity. I don’t think any of us do it for vain reasons, or the audience of whatever medium we’re in.”

Naturally, the message of the organization provokes anger, which is exactly what they want. The Kansas-based Church has made more than a pretty penny off of lawsuits regarding physical assault from bystanders over the past decade.

Rowan Vickers, drama alum, chose to stand his ground and shouted lines of Shakespeare in retaliation. I asked him what inspired him to come back to school that chilly morning. “I am here to stand in protest of the WBC and in solidarity with my brothers and sisters, gay, straight, black, white, artists and non-artists. We all need to stand in unity and brotherhood and sisterhood and stomp out the hate. I think that one of their claims is the vanity of the arts and that we all need to submit to God and to use our time on earth to worship him and carry out his will. If his will is what they say it is, he is not God. He is the devil. I don’t know specifically why they’re here today but I know why I’m here today: to step up to them.”

My initial response to the WBC was disappointment. Where were the oversized crucifixes and megaphones? Where were the demonizing screams telling me that I was going to burn in hell? Curiosity finally got the better of me and I approached the youngest of the three, who was probably the same age as me. Her response to my questions were as mundane as the phrases on her sign, verbatim straight from the church’s website.

“Go read Romans 9, or I can read it to you, it’s amazing, just a part! He’s God! He can do whatever he wants! Romans 9 Guys! I’m not telling you that your life is vain. If this is what you’re going to make your life about, this is what God says, if you’re guided to keep his commandment, use what you’ve got to serve God.” When I asked her about her mother who was still bouncing to her hymns, she explained: “She’s using an art to serve God. That’s what we’re telling you to do. That’s that. One hundred percent of your duty is to serve God.”

Perhaps this is something greater than a small demonstration of a hate-group. This raises questions of how we can politicize our art to create good in the world, as citizens, performing artists and as decent human beings. That morning, I saw the politicization of art for good; I saw the unstoppable defense of a wall of sound that permeates through hate; how a pirouette or a verse of Hamlet can become a valiant resistance to the ambiguities of discrimination. Music brings us together-whether you’re playing the pit or holding up the sheet music for a friend.

Dean Adam Meyer stood from afar among many faculty members:

“I think it’s sad that we live in a world where three people and the Internet have the power to spread such a hateful message—what a waste of energy! In a way, by showing up and counter-protesting, we gave this horrible group what they wanted, which is attention. But in the end, the positive student response greatly overshadowed their bigotry, and Juilliard proved once again that love trumps hate. Personally, I was very moved that the protesters were met with music, kindness and generosity of spirit, which only served to bring the community together in a unique and powerful way.”

Disregarding all cheesiness, I guess you could say I saw what it really takes to be an Artist as a Citizen. To quote Joseph Polisi, the man that coined the phrase:

“On the west side of the building entrance we saw hate, bigotry, and ignorance. On the east side and just inside our building we saw hope and empathy, accompanied by music.”

We are all trying to grow up. We all want to be the next star of our field that Juilliard will brag about. Seeing a bunch of young artists huddled on the sidewalk reminded me of our youth, and that our powers lie not in our fame or our money but our talent, our raw, unclean passion.

That morning, we skipped breakfast and sacrificed an hour of sleep to stand up with our weapons of craft and waited, unshaken but trembling together.

Daniel Hass and Leerone Hakami contributed material to this article.